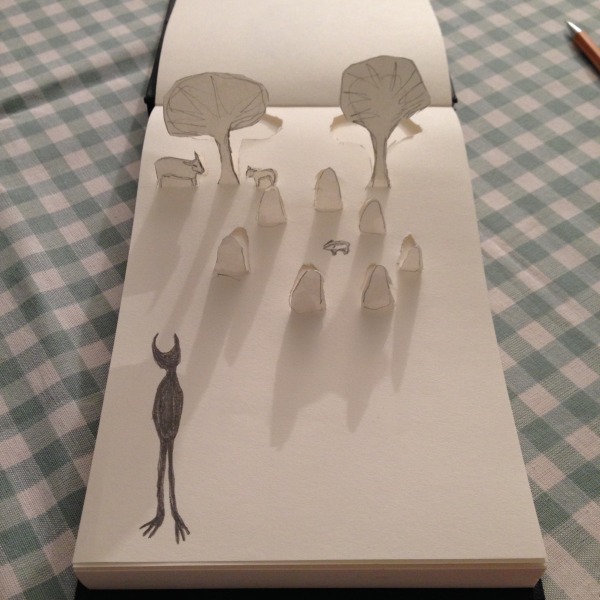 I’ve been playing around making little sketches of the rewards that people will get sent when the crowdfunder target is reached and everybody sends me their money. A lot of the rewards are paper-based and self-assembly as they will be emailed out as .pdf files, so people can print them out and assemble their own shadow puppet or diorama. Most people can get access to a printer that prints A4, so I need to make sure I can fit the reward onto one or two sheets of paper. I had a go at designing the diorama on a page of my A5 sketchbook, using pencil and scissors. The results were a little haphazard (tip from Kristin McGuire – use a lasercutter, not scissors) but gave me an idea of how to fit the elements around each other and stand them up.  I also got a few useful tips today about how to make my trees stand up from Davy McGuire I want to add a few more trees at the back.

Now I just need to work on making the cows look less like sheep (hips not boney enough), and standing stones that don’t look like giant teeth. There were really white cows and calves in the field at Lumb Bank, three of each – even the animals were magical there. A white dog that appeared in the garden outside my window, white cows and calves, and a badger that appeared at 3.30pm one afternoon, running along the cow field below me in broad daylight, maybe heading for afternoon tea with Mr Tumnus. Published: 20 December 2014 Category: Uncategorized
Previous: Looking up at a midnight sky
Next: Recruiting