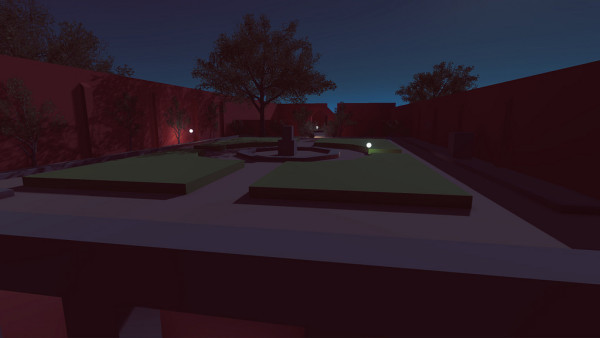 If you’ve been following @prettydigi on twitter then you will know that I have recently spent some time working with Sam Ibbotson of Meteor Pixel on updates for Lux & The Shadowmaker. Sam is a talented 3D artist and game designer who mostly spends his time working on Meteor Pixel’s own game ‘Bushido: Legend of the Samurai’.  We spent a couple of days going over what I already have, what I would like to have, and how to get from one to the other. We then spent time building a draft version of a more complex garden to focus on developing – so, not the whole game, just the middle section of walled garden. So here’s a couple of taster shots which show the structures with little texture as yet, so no brick work or paving or grass. This is more about quickly mapping out how the landscape, gameplay and objects interact with each other, as well as how the different types of lighting affect each other. Much as I love the initial version of Lux&TS, I always wanted to make a richer environment for people to wander around in, which was not achieved in our initial couple of months of work. I learnt a lot from that, and did end up with a small playable game, which, for all its faults, still manages to get a reaction from players, even if it is just to scare the proverbials out of them. Fingers crossed, this is a good fresh start, and the bushes will soon be rustling…